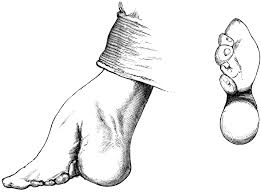 Beauty Hurts, a Short History of What Women will do to Please Their Man.

Everyone likes to look good and know that they are appealing to their significant other or to attract a significant other. Historically women have gone to very painful degrees to appear to be the fairer sex and to keep or catch a man. Back in the day women did not work outside the home, so their goal was to make the best marriage that they could.
In the Victorian age, women were thought to be the weaker sex, prone to “vapors” and fainting spells, just delicate little flowers who needed a man to survive. What the girl needed was to be able to breathe.
The first corset arrived on the scene circa 2000 BC and gained the peak of their popularity in the Victorian age. Starting in the 16th century, they began to make them with stiffening materials to compress and shape the woman’s form. They used whalebone steel, wood, and cane. The goal at this time was to squeeze the woman’s breasts and stomach, making them as flat as possible. After the 16th century, the goal was to slim the waist and uplift the breasts.
Many of us have watched the scene from Gone with the Wind where Scarlett is hanging on to her bedpost for dear life and mammy is straining to get her corset tight enough for an eighteen-inch waist. Mammy pulls and pulls, but she finally has to tell Scarlett that she is going to have to accept that her waist is now 20 inches. No wonder the women were literally left gasping for air and fainting. The corsets pushed against their ribs, dug into their stomachs and put pressure on their internal organs. Much of the damage was irreversible, with permanent changes to their spine and abdominal cavity occurring. This also lead to heartburn and atrophy of their back muscles. They were used to the corset supporting them that their back muscles couldn’t do the job anymore. Their lungs could not fully expand so this would exacerbate any conditions they might have such as TB or pneumonia.
Another harmful beauty practice that is genuinely cringing worthy is Chinese Foot Binding. This horrific practice started in the 10th century by a court dancer called Yao Niang. She had these tiny little feet, and she danced around on a lotus flower and so entranced the Emperor Li Yu that small feet became an erotic symbol, primarily due to the gait the woman had to use to walk, relying on their thigh and buttock muscles. It went on to become a status symbol, and the most desirable brides had a 3-inch foot, also called the “Golden Lotus.” Four-inch feet were the silver lotus, and 5 inches and up were an iron lotus and likely to remain unmarried.
This process began when the little girl turned five. Keep in mind when you are reading this section that this is being done to a five-year-old child. First, the feet were plunged into boiling water and the toenails trimmed as short as possible. The feet were then massaged with oil and then every toe except the big toes broken. On a five-year-old child people. The toes were then bound flat against the sole making a triangular shape. The arch was then strained as the foot was bent double and wrapped tight in silk bindings. The feet were unbound every few days to allow for the blood and pus to be cleaned away then re-wrapped tighter. Any excess skin was encouraged to rot away. During this time the little girls were forced to walk long distances to speed up the process. This went on for two years. All, so they good make a good marriage or be a favored concubine.
In Thailand, the women of the Kayan tribe wear neck wears that coil around their neck giving the illusion that their necks are very long. This is considered a status symbol and a sign of beauty. This also starts at the age of 5 when a massive coil is placed around their necks. It pushes the collar bone down and causes permanent deformity and discoloration. It pushes the collar bone down so far that it compresses the rib cage. The coils are worn continuously because over time the muscles would be so weak without they could not support their heads.
Thankfully these practices are almost unheard of in modern times. Beauty can hurt, but it shouldn’t maim
BBC news/Burmese women in that “human zoo”
Therichest.com
Fashiontime.org
http://www.smithsonianmag.org

Published by TheOddPast by Matthew A. Perry

Writer, teacher, broadcaster, and podcaster from West Virginia. I write about and discuss the wacky and weird side of history on my website www.theoddpast.com and my podcast "The Odd Past Podcast" available everywhere View more posts