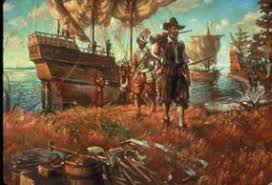 Throughout the ages of the human experiment, there have been times when people have been faced with indeed a terrifying prospect. It is taboo, almost too taboo to even fathom, but there are multiple instances throughout history where cannibalism has been practiced. It is something the ordinary human doesn’t want to think about, carving up and eating the flesh of a fellow human, we look down upon anybody who even harbors the notion, but the earliest Europeans on this continent were faced with that terrible decision.
Life for the earliest of European settlers of North America was tough, the elements were harsh, and the ground didn’t give them the bountiful harvest they imagined. At the Jamestown, Virginia Colony, things were rough. The first settlements of Jamestown occurred in 1607 by the winter of the next year, only 38 people survived. Food was low, the weather was harsh, and the natives of the area didn’t take too kindly to the fact of European settlement. The survival of the Colony rested upon the shoulders of those 38 people. With so much on the line, these people turned their sights to the best source of food they had, the freshly dead corpses of their fellow Colonists.
Don’t misunderstand me, there is ZERO proof that the people of Jamestown murdered their fellow colonists for their meat, they only harvested the freshly dead from natural causes. For the longest time, there was an only scant written testimony of cannibalism in Jamestown, but four years ago there was a breakthrough. The skeletal remains of a 14-year-old girl were found, and her skull and leg bones showed the tell-tale marks of harvesting. The skull was clumsily butchered for her brain, as that was a good source of food for the starving colonists. This shows archaeologists and historians alike that the butcher was not anxious or happy about the prospect, they were merely trying to survive. The discovery of her skeleton answers the age-old question of cannibalism at Jamestown and brings the “starving time” of 1609 into a much darker light than ever before.

About TheOddPast by Matthew A. Perry

Writer, teacher, broadcaster, and podcaster from West Virginia. I write about and discuss the wacky and weird side of history on my website www.theoddpast.com and my podcast "The Odd Past Podcast" available everywhere